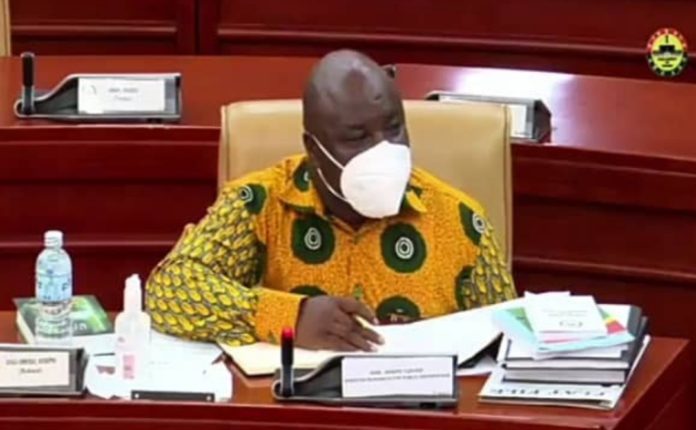 The vetting of Minister-designate for Public Enterprises, Joseph Cudjoe, on Tuesday, February 23, 2021, was disrupted.

This was after the Minority Caucus Leader, Haruna Iddrisu, demanded clarity on the portfolio which he described as ‘non-existent’ per the Executive Instrument (E.I.) 12 of Civil Service Ministries Instrument 2021.

He argued the C.I does not cite the portfolio, hence, demanded clarity on it.

“Within the meaning of E.I. 12, there is no Ministry for Public Enterprises so the Presidency ought to provide clarity and guidance on the situation.

“Even if it takes until midnight for the correspondence from the President we will wait but as we proceed, there is no Ministry for Public Enterprise and our hands are tied because we should be assessing him based on the role he is going to play,” the Tamale Central Member of Parliament (MP) demanded.

The Deputy Majority Caucus Leader, Alex Afenyo-Markin, however, urged that the Appointments Committee could continue with the process and compared it to the Ministers of State under the Presidency.

“I would want us to consider his nomination, not as one for the purposes of running a ministry,” he urged.

His comment, which was not satisfactory to Mr Iddrisu, was greeted with a threat.

“Our side will just sit and observe while we wait for clarity and better particulars from the Presidency. We do not intend to take part in further proceedings until we receive a satisfactory explanation from the office of the Presidency,” he argued.

The Chairman of the Committee, who is also the MP for Bekwai, Joe Osei-Owusu, on his part, said their demands could not be met without the Speaker of Parliament’s consent.

“I don’t think I can go behind Mr Speaker to speak to the Presidency on matters like this so let’s proceed with what we can,” he directed.

However, the Committee went into consultation after two members, Patrick Boamah and Samuel Okudzeto Ablakwa, suggested they go off-camera to resolve the issue.

44 Cheap Ladies Chasing Me But I’m All Yours, You Deserve My Love – Sarkodie Reassures Tracy – Video

Lady reportedly fired her boyfriend she employed because he consume 1 vitamin C without...

“I Need To Marry A Wealthy Husband So I Can Go A Whole Year...

44 Cheap Ladies Chasing Me But I’m All Yours, You Deserve...