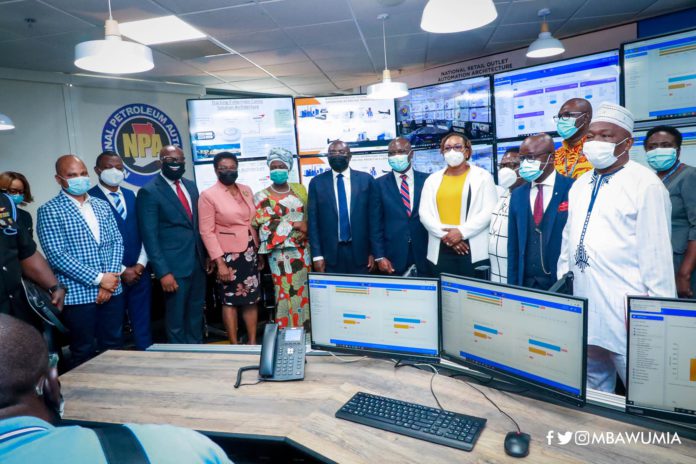 The launch of the system is part of aggressive reforms to seal all revenue leakages in the downstream petroleum sector.

According to the Chief Director of Safety, Esther Anku, the fuel monitoring system is a demonstration of NPA’s commitment towards improving the efficiency of the petroleum products distribution system.

Speaking at the launch, madam Anku revealed that the system also constitutes a major plank in the broad structures deployed to control illicit activities in the petroleum downstream industry in the country.

Launching the system, Vice President said the initiative would not just improve the Petroleum Product Distribution System but also go a long way to help the government in its effort to maximise the mobilisation of revenue from petroleum products.

“Taxes and levies on petroleum products are major sources of revenue for the government in pursuing its developmental agenda.

“Actions, decisions, and policies of individuals and corporate bodies which result in petroleum product distribution leakages with consequential revenue losses to the state inhibit economic development and therefore have serious negative consequences on the developmental agenda of the government,” he justified.

The National Retail Outlet Fuel Monitoring System is aimed at complementing measures already taken in the fight against illicit activities and it is expected to monitor the receipt into the retail outlets of smuggled products, products meant for export and diverted subsidised products such as Premix and MGO local.

The implementation of the National Fuel Monitoring System, comprising the installation of Automatic Tank Gauges and Forecourt/Dispenser Transaction Control System at the retail outlets, will provide data on sales and in-tank volumes that enable remote monitoring, and will therefore be an effective tool to combat unauthorised Third Party Deliveries.

Stilo Magolide Confirms Cooking On A Project With Moshe Kgasoane

DJ Cuppy Dragged Again By Trolls For Her Poor And Absurd...

Heartbreaking Video As Akuapem Poloo’s Mother Sings For Her In Video...