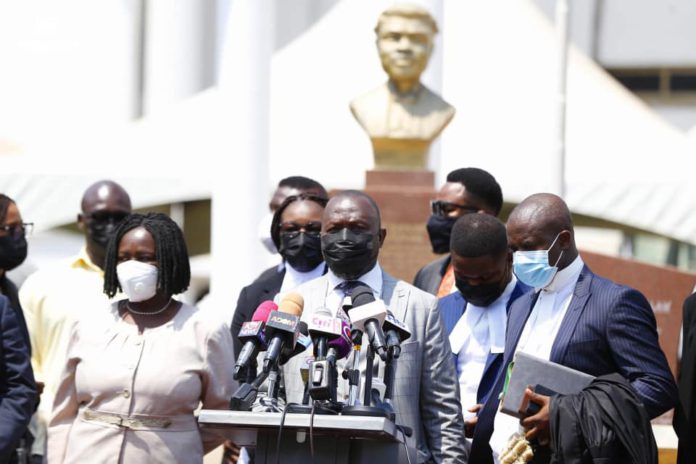 National Communication’s Officer of the National Democratic Congress (NDC), Sammy Gyamfi, says contrary to popular view, Dr Dominic Ayine is not running away from any contempt charge against him.

According to him, Dr Ayine did not show up in court for the petition hearing on Thursday because he is bereaved.

Mr Gyamfi said the party has seen a publication claiming Dr Ayine had been cited for contempt but there was no reference to the processes.

“We will wait and get confirmation on that before we can make our position on that known,” he added.

His comment comes after reports went viral that the Supreme Court had cited Dr Ayine, who is a spokesperson for petitioner John Mahama, for contempt after he said there was a predetermined agenda among the judges to rule against the petitioner.

The statement followed a unanimous decision by the Supreme Court to dismiss an application by lawyers for the petitioner that sought leave to reopen his case and subpoena the Electoral Commission Chairperson, Mrs Jean Mensa.

The reports claimed that Dr Ayine was expected to be served with the process on Thursday, February 18, and subsequently be called to answer to the court.

However, Mr Gyamfi believes Dr Ayine, who is a senior member of the bar, meant nothing malicious when he made his statement.

“He is capable of explaining these issues in a way that the justices of the Supreme Court and Ghanaians at large will appreciate if that time comes,” Mr Gyamfi added.

Reno Omokri Educates Ladies On Questions They Should Ask When A Man Asks If...