Although some of them are ordinary and relatable, otherwise are very weird such is the p*nis festivals celebrated in Japan.

The festival is known as the Kanamara Matsuri, or the Festival of the Steel Phallus is a sxual repression that gets set aside for one joyful day of cross-dressing, pnis-shaped lollipops and, of course, a few giant phalluses.

More formally known as the Festival of the Steel Phallus, Kanamara Matsuri is celebrated annually on the first Sunday in April, at Kanayama Shrine in Kawasaki, south of Tokyo.

Its origins can be traced back to an ancient Japanese legend. As the story goes, a vicious demon hid inside the vagina of a young woman after falling in love with her. Such was this entity’s jealousy that it proceeded to bite off the penises of two young men on two separate wedding nights. In the aftermath of this grisly ordeal, the woman sought help from a blacksmith who fashioned an iron phallus to break the demon’s teeth, which in turn led to the item’s enshrinement at Kanayama Shrine in Kawasaki.

Sx and religion in Japan are by no means exclusive thanks to the flexibility of the Shinto, a form of worship that acknowledges and honours spirits found in nature. The Kanayama Shrine became a focal point for couples who wished to pray for fertility and good fortune in their marriage. From the 17th to the 19th century, sx workers would frequent the site to pray for either protection or cure from s*xually transmitted diseases.

It was around this time that the first festivals focussing on sexual health took place at the shrine, but the tradition had fizzled out by the end of the 19th century. It wasn’t until 1970 that the chief priest at the time, Hirohiko Nakamura, decided to resurrect the event, albeit on a fairly small scale, and at night. After about 40 years of this, the festival’s popularity skyrocketed when, in 2012, TV star Matsuko Deluxe – an outspoken advocate of s*x positivity and LGBTQ rights – name-checked the festival. By now, it’s a fixture on the festival circuit and sees about 50,000 attendees each year.

Like many Japanese festivals, the main event is a procession of mikoshi (portable shrines). The key difference is that, in this case, the shrines contain a variety of huge phalluses, which you’ll see bobbing over the heads of the crowd as they’re carried along the packed street.

You’ll need to arrive in the morning if you want to grab a good spot – the earlier, the better. The procession heads down the road to Kanayama Shrine, starting around noon, with each mikoshi carried by a group of people in traditional dress. The main attractions are the Kanamara Fune Mikoshi, the Big Kanamara Mikoshi and the Elizabeth Mikoshi. The first two are traditional-style floats – albeit housing huge penises, made of steel and wood respectively – and are impressive enough, but the Elizabeth Float is the uncontested star of the show.

This mikoshi was donated to the event by Elizabeth Kaikan, a drag bar in Tokyo’s Asakusabashi that has been running since the 1980s.

It features a large pink phallus, often draped in the ropes (shimenawa) and folded paper (shide) that indicate a holy object in Shintoism, and usually protected by a lacy canopy.

The men carrying it – a joyful group that forms the focus of the festival’s celebration of queer culture – cross-dress in bright pink kimono, wigs and make-up.

All the mikoshi start and finish their journey at the entrance to the shrine. The round trip takes well over an hour, so you’ll have plenty of time to visit and snap a picture (after asking permission, of course) with all participants before and after the parade.

Aside from watching the procession, you can enjoy all the traditional festival foods and activities – plus a few that you’ll only find at the Kanamara Matsuri.

On the traditional side, you’ll find delicious dishes such as yakisoba (stir-fried noodles), okonomiyaki (savoury pancakes), takoyaki (fried balls of batter with a piece of octopus inside) and the much-loved choco banana – the chocolate-dipped fruit makes the most of its already phallic shape.

It may seem incongruous to have a raucous festival celebrating genitalia in Japan, given the country’s reputation for being mild-mannered, discreet and extremely private.

However, in Japanese society, there are plenty of opportunities to let your hair down – they just tend to be very clearly delineated.

So while you may get wildly drunk at the office nomikai (drinking party) and sing some ill-advised karaoke numbers with your boss, on Monday all will be forgiven and forgotten.

And though it’s not generally acceptable to discuss your sx life in public – or even admit to having one – at the Kanamara Matsuri, whole families will show up to celebrate sx, fertility and the creation of life itself.

Though the festival fell out of favour for a while, perhaps it’s not that surprising that in 2019, it’s one of the main fixtures of the festival calendar.

After all, Japan is facing an unprecedented demographic challenge with its declining birth rate. With the government backing everything from child allowances to officially sanctioned speed-dating, it seems the perfect time for the resurgence of an ancient fertility festival.

But there’s a more modern reason for Kanamara Matsuri’s popularity, too.

The festival has become an outlet for certain marginalised LGBTQ groups in Japan, who often have to tone down or entirely hide their queer identities – as the infamous Japanese proverb goes, “the nail that sticks out will be hammered down”. Here, fluid gender identities and s*xualities across the spectrum are celebrated, the most visible example being the group of cross-dressing men and transwomen who carry one of the portable shrines.

You never thought such a festival exist right, you are not alone.

Watch the video of the festival below 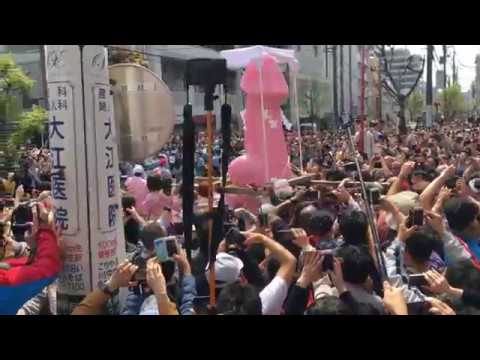 It’s sad how legends in the Arts industry are not honored before they pass...

All the men who approach me wants to enjoy the Apple between my legs...

Video Of Cardi And Offset Happily Giving A Doggie On Insta...